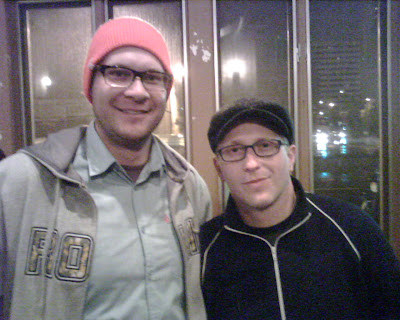 Had a great weekend, Erin and I celebrated our one year anniversary. We headed to Denver to celebrate a bit. Saturday night was pretty great with a show at The Marquis Theater. This was a rare occurace, every band that played was actually good. First off was a band from denver who I can't remember, but not bad, second was SleeperHorse, these guys were really good, I thought kind of Small Brown Bike-ish. Next up was a band called Dead to Me (love the name, it's a phrase I use quite often) they were rather entertaining as well.

To cap the evening off was The Draft, this band was formed after Hot Water Music front man Chuck Ragan called it quites... Don't get me wrong The Draft is a Great, Solid Band, but listening and seeing them live you just know if they had Chuck up there with them they would just be that much better and MORE Amazing. Great Show to say the least.

So as we were enjoying an intermission cocktail I noticed a guy who looked like Jason Black of The Draft, wasn't 100% sure, so Erin took the initiative and went down and asked, sure enough it was and we both got a shot with him... Thanks Erin.

So it was a great weekend and a great top off of my first year of married life, once again... THANKS Erin for being you.

:: "Stay hungry, Stay free and do the best you can".The Gaslight Anthem ::